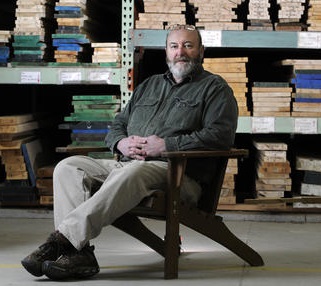 David’s interest in woodworking began when he entered 7th grade in Bolton CT., influenced by Roger Titus the industrial arts teacher at the then Bolton Junior Senior High School. Two years later the school became only a High School which kept David under Rogers’s guidance and influence for 6 years until he graduated. After High School David furthered his education at Manchester Community College and Hartford State Technical Institute, as well as taking several courses with the Architectural Woodworking Institute. From 1977 – 1979 David moved to Ghana (West Africa) to work as a volunteer in the Peace Corp. Working for Forest Products Research Institute (FPRI) on the campus of the University of Science and Technology, David managed the construction division at FPRI which consisted of a woodworking shop as well as a division that provided light construction for the Institute’s research nursery and other divisions. While in Africa David traveled in 13 countries and hiked to the summit of Mt.Kilimanjaro (19,340’). Upon returning to the U.S. David took the summer of 1979 off and embarked on a 9,000 mile motorcycle trip around the United States. After returning to Connecticut, David purchased a pickup truck and a skill saw and began his woodworking career. The rest is history as they say. David is married to his wife Rebecca and has 3 sons, Gregory, Brendan, and Ryan. In his spare time David enjoys spending time with his family, camping and traveling, as well as golf, fishing, gardening, and collecting vintage woodworking tools and coins.